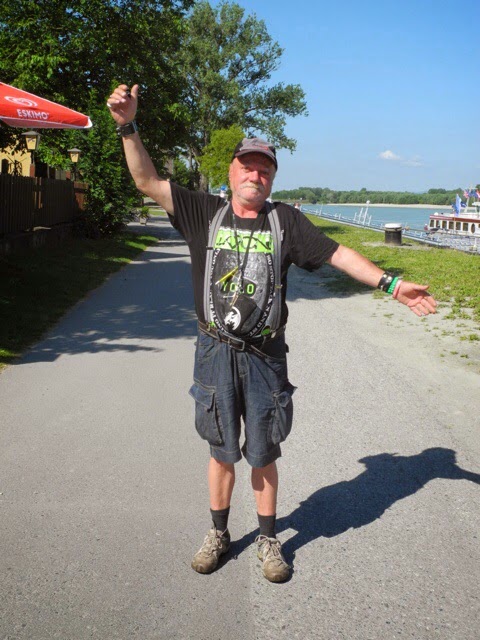 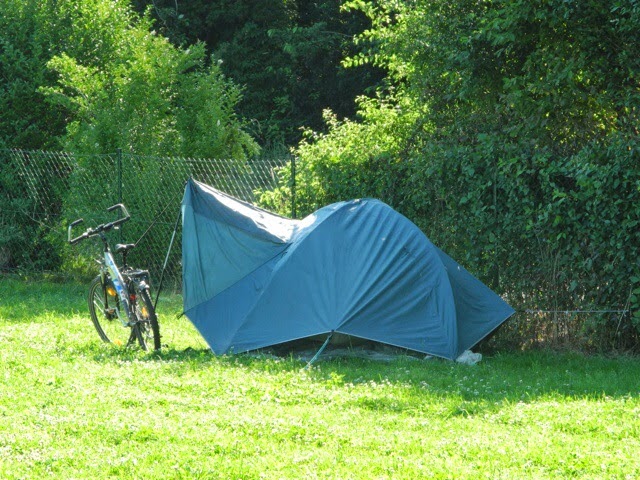 I didn't feel like walking up to the giant benedictine monastery but it seemed strange as well to finally be so close to it (I saw it often from a distance, driving to Slovakia) and not at least see what it looked like from the outside at close range. The campsite where I stayed was also the Fährhaus, the place where the big tourist boats, doing a slow Danube cruise would stop over for the night and spit out the crowds of Americans, Japanese, Australians, Europeans to walk up the monastery steps and pay the € 10,- I couldn't afford.

Maybe this is a good moment to talk about money. Especially since by the end of the day I would unexpectedly meet Knut the Icebear again, who really doesn't have any money, apart from some days when he is lucky. Today was one of his lucky days.

I am not poor. I have a bank account with enough money to pay the €10,- for the Melk monastery entrance fee without hesitating. To pay for a hotel in Melk and a diner somewhere. But on my walk I only use the money I received from people who want to support me. When I left I had € 1204, not much, but I figured money would come in during the walk so I counted on € 15 a day for 96 days. By now I received € 1796,50, which means € 18,71 a day. I managed well. Partly because there were many people on the road who gave me shelter, food, coffee, books, maps, partly because I slept outside or in abandoned places and bought most of my food in supermarkets. There were quite some proper meals in restaurants too, glasses of beer at the end of a long walking day, the occasional hostel or cheap hotel. Some of the money, gifts, things I needed on the road I received came from friends and relatives, but most of it was donated by strangers. Now and then somebody from the USA, New Zealand or Sweden would put €10, €20 sometimes even €50,- in my PayPall account. They must have seen my blog through their friends' Facebook pages or read the article I wrote for The Dark Mountain Project. Sometimes people on the road gave me money. Payed for my meal. Didn't charge me for the accomodation. I sometimes asked for a discount but usually I just told my story and people would give. In Melk I asked though. And I used the word pilgrim.

I hadn't planned to even try to go inside but when I was there I thought it was strange that it wasn't possible to enter the church through the proper door, only through a small door at the side where you could walk some meters to a fence blocking the way to the church proper. You could do your prayers in the corner and leave.

Don't get me wrong, I am not religious and I don't want to pray. I am not a pilgrim in the religious sense of the word. But I have been thinking about this word a lot. When are you a pilgrim? Why do
People who are not relgious at all and have money and got themselves a pilgrim pass to make the walking easier have a right to use specific cheap accomodation and somebody walking the world slowly, taking the time to talk with people about important subjects, trying to share as much as possible, give attention, doesn't? And what if you are a "proper" pilgrim and you want to visit the church in the Melk monastery? You have to pay €10,- or stick to the corner designated to people who don't want to or can't pay.

I decided to see what happened if I explained about my journey, using the words pilgrim and artist, telling I would like to see the monastery from the inside but only had €18,- a day. So I did. And got a discount offered at first. € 5,50 is still a third of my daily budget though. So the kind woman behind the desk made me a guest of the house. But not without saying she hoped I was honest. I hope I am honest too. I think I am. I do my utmost best to be as honest as possible.

It was quite overwhelming, all the gold and glitter, lots of mirrors, Benedictus wanted you to look at yourself. His words were everywhere, done in an artistic way. I wondered what happened to simpleness and soberness.
The library was amazing, these old libraries always are. I wanted to open the books, but of course you aren't allowed to do that. Understandable. The church was the last building in the route. There were two catacomb saints, who were given to the monastery as gifts by two different persons in the 18th century. Their skeletons were beautifully dressed. They were on display in a glass sarcophagus, Clemens and Friedrich.

In the gardens a similar display of mirrors and words. A nice herbal garden where I laughed about the particular part where they were cultivating nettles. It had a wooden sign, explaining what they were and what use they had. I bet the gardener spent a lot of time removing them from other parts of the garden they liked better.

The campsite was busy when I returned and although the field was huge, people must have thought my particular spot, where I had been on my own in the morning, was the best spot. Some tents were almost glued to mine. I escaped to the Fährhaus terrass where I heard somebody say my name. It was Knut the Icebear, the tramp with the bike, carrying around his tv, the man who called himself a nomad and whom I had given some money in Grein. He had been lucky today. He had played the one armed bandits in the Casino and had won. He bought me a big glass of wine. He was at the campsite, he had installed his tent. He told me he had his kitchen corner, his reading corner and his bedroom. I saw the tent later on. It wasn't as tiny as my tent but it was hardly big enough to stand in. In Grein we had talked little. I hadn't liked his negative stories about foreigners and his ongoing rattle about how unlucky he had been in his life but it was a strange coincidence to see him here again and being on your own on the road it is nice to be recognised. I was curious too. Despite of his continuous complaining he had something sympethatic. I wondered what he had been like before he started moving around.

Apperently he always wandered around in the same area. He had been on this particular campsite once when there was a lot of snow. I guess that is where his nickname came from. He said they were already waiting for him on the other side. It sounded as if he was on tour. But he would be in a house from September on, at least until spring next year, maybe even for a full year. "My manager arranged it for me," he said. Later on he gave me his manager's address, in case I wanted to write to him. And he gave me his future one. A chalet next to a castle in Attersee am Attersee. "Villa Orleans". He drew the castle and the location of the chalet and told me there would be room for me if I needed a place to live. He wrote his info on a piece of paper he had torn out of a book. It was under the printed line "Das Leben ist doch schön, dachte er und atmete tief ein. So schön ... so verdammt schön." (Life is beautiful he thought and took a deep breath. So beautiful ... so damn beautiful.)

He ordered us another drink. He payed. He promised me he would make me coffee next morning. He didn't, he forgot. But he did come over the next morning early to wave me out. "It always hurts to say goodbye" he said. 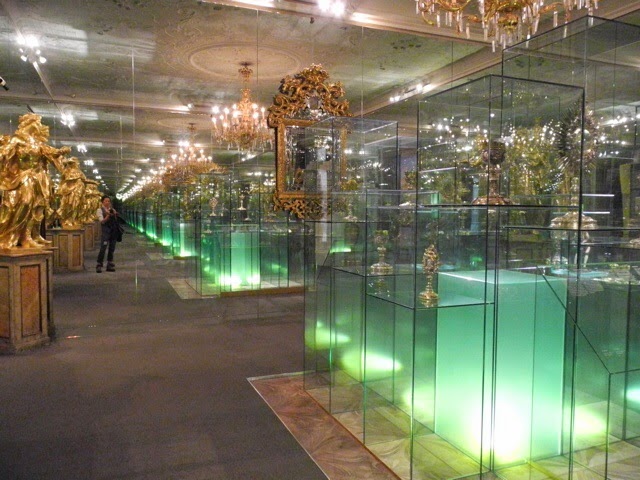