Day 89. Saying goodbye to a river 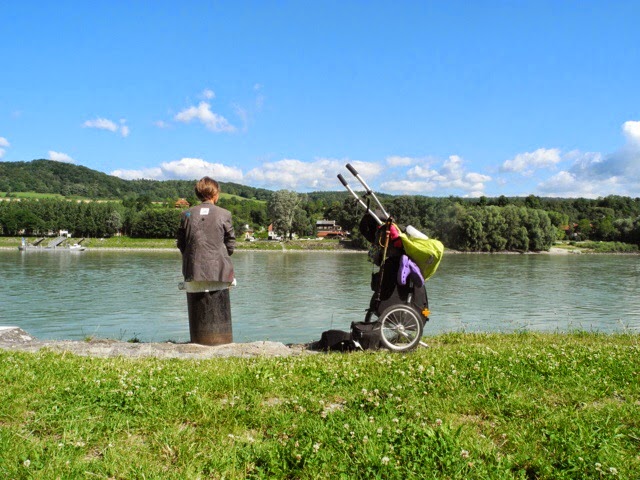 I left Melk and Knut the Icebear. He was working today. Which ment asking people for money. He would work hardest around seven when he was hoping to win this week's Lotto jackpot. "I will look for you if I won a million," he said, "I'll send the police around with megaphones, shouting "Monique, where are you?" Or I can rent a helicopter and look for you myself."

I said goodbye to the Danube. A new road was waiting for me.

Another hot day. I walked another Radweg, the Pielachtalradweg, through Spielberg, Loosdorf, Obergrafendorf. Not far from the small village of Willensdorf I found another hunters cabine. It was next to the bike trail but hidden well. The cabin stuck out of the treetops, that is why I had noticed it, but the entrance through the bushes to the high ladder was difficult to find.

There was a stream next to it. A huge tree shaped like a seat in front of it. I dragged C. up the ladder. It is somewhat complicated always but there are straps on the back so I can carry the cart like a backpack.

It was unlocked. It hadn't been used for a while. It was hot hot hot inside and the floor was covered with dead moths. There were spiderwebs in the corner but once I opened the windows, one in every wall, removed the moths, it was quite comfortable. There was a small bench and a chair with a pillow. A door I could lock from the inside. A river I could wash myself and my cloths in. Beautiful views to all directions. I could see the moon over Willendorf from the east and the north window, the fields from the south window and the river Pielach that gave the bike trail and the valley its name, from the west window. It was small but almost big enough to lie down in, putting my head in one corner and my feet in the other. It was defenitely one of the best places I had stayed in until now. Not the most comfortable one but it had been a long time since I had a place really to myself. In hostel rooms you have to be in time for breakfast, check out before 10 when you're lucky, when you're couch surfing you have to take your host into account, in the fields or woods you have to make sure nobody sees you and you can't really stay for two night in a row. Here I had everything I needed and the freedom to do what I wanted. Ah, how wonderful to be so happy with so little.

When I get home, wherever that is, I will build myself a treehouse. Or I will find one somewhere and call it home.