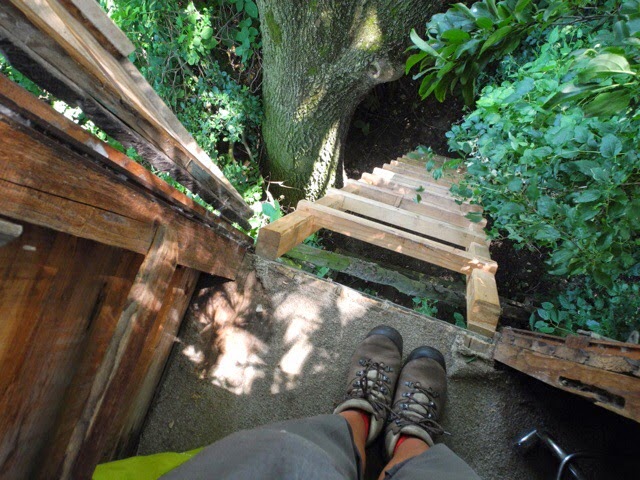 This is a strange sidestep from my slow journey. Today I have a deadline. I have to send in a proposal for a residency I would love to be part of. It is called Performance as Process and that is exactly what I am doing right now. But because that is exactly what I am doing right now, it is almost impossible to write an application. I found the time to think and write about it, but there are strict rules concerning format I have to follow writing it and on my tiny iPad it is hard. I spent hours finding the right apps to fill out pdf forms, make multiple page pdf's from photos, make e-mails containing more than 1 attachment, spending hours downloading the apps and figuring out how they worked. I realised I did bring my perfect documentation files on a stick but it doesn't work with my iPad and out here it is hard to find a proper computer to work on. I managed to put something together but it isn't perfect, I couldn't get the image quality the way I wanted it and I didn't manage to put in text with my images. Well. That is the way it is. And I figured that, since I am in the middle of my 96 day performance, this struggle is part of my performance too, so I should write about it and of course I hope the selection committee will read this and appreciate my writing an application for Performance as Process being part of my own performance as process.

This morning I will finish it and send it of. I never wrote an application in a stranger situation. Last night, day 89, I walked until late and found an out of use and unlocked hunter's cabin in a perfect location. The entrance to the ladder was hidden behind some bushes and there was a stream running behind it so I could wash. It was hot inside, all the windows were closed and the floor was covered in dead moths.

It is situated high up in the trees, right now it is noisy because the wind is strong and branches scrape along the outside walls. There is a window in every wall and last night I saw the small village of Willendorf bathing in the moonlight from one of my windows. Maybe the name rings bells, like it did with me. Yes, the Venus of Willendorf was found there, one of those beautiful stone female figurines from the paleolithic age. Apperently these days you shouldn't call it a "Venus" anymore: the nickname, urging a comparison to the classical image of "Venus," is now controversial. According to Christopher Witcombe, "the ironic identification of these figurines as 'Venus' pleasantly satisfied certain assumptions at the time about the primitive, about women, and about taste." (from wikipedia: http://en.m.wikipedia.org/wiki/Venus_of_Willendorf). I find that nonsense. They recieved this name, let them keep it.

The cabin is almost big enough to stretch myself out in from one corner to the other. There is a chair with a pillow and I am sitting on it now, writing this so I can add the link to my application, send it off and quickly get back to the walking. Although it would be a perfect place to stay all day and write, to look out of my windows. There will be a thunderstorm tomorrow though and I have to get moving. Only a week left. Being slow can make time go fast.

(I suspect I've been too quick in my conclusions. Apparently there are more villages called Willendorf in lower Austria. This might not have been "the one" after all. But anyway. It did make me think about the Venus.)
Posted by monique besten at 00:12