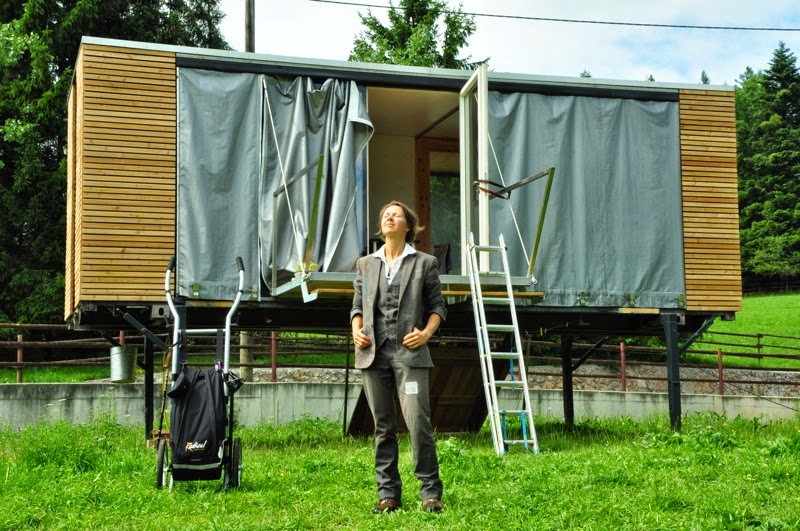 I live in a villa these days. It suits my suit. I feel at home here. From my terrace I can see the yellow spots in the grass where only last week my neighbours were living, when I was still situated in downtown Nomadic Village, in a red bus named Lufka. When Lufka left with its owner, when all the Nomads had left, I moved uptown. But without a downtown there is no uptown. Without neighbours there is no village.

During these last weeks Herr Drama interviewed people about the meaning of a village. What makes a village a village? What does it need to deserve the name village? I answered "people". Although most villages have a church and a cafe, they aren't necessary. The minimum you need is a couple of inhabited houses. And for houses you can read mobile homes. I don't know how many houses you need to form a village. Is two enough? Is that why I left my tent in the middle of the field? So this might still be a Nomadic Village? A mobile villa and a tent? Two inhabitants even though one of them, Gerhard, the man who made the villa, isn't there?

I don't know. And it doesn't matter. Not today.

The villa ran out of gas so I installed my outdoor kitchen. A titanium lightweight woodstove. I hardly used it on the road, because I either tried to be invisible when camping in the "wild", or I wasn't allowed to use it because the campsites have strict rules about fire. The villa ran out of food too, so I walked to the nearest grocery shop. Well, walked ...... there is a reason why this place is called Hohe Wand, High Wall. The shortcut to the nearest village means climbing. So I didn't buy any eggs or liquids in bottles. And I managed to bring almost everything safe back home. On my way up I collected wood to do my cooking. And when I found some big tasty beautiful parasol  mushrooms I wondered why I had bothered to go all the way down. There is plenty of food around. 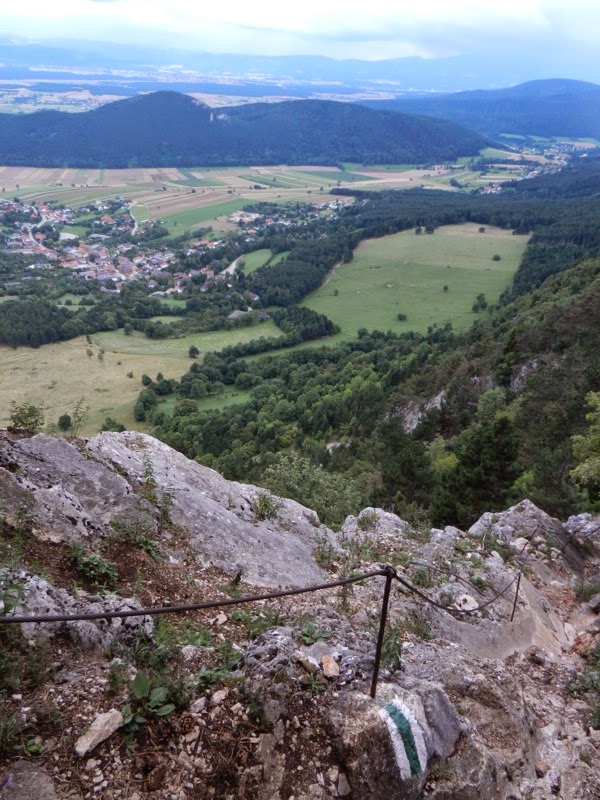 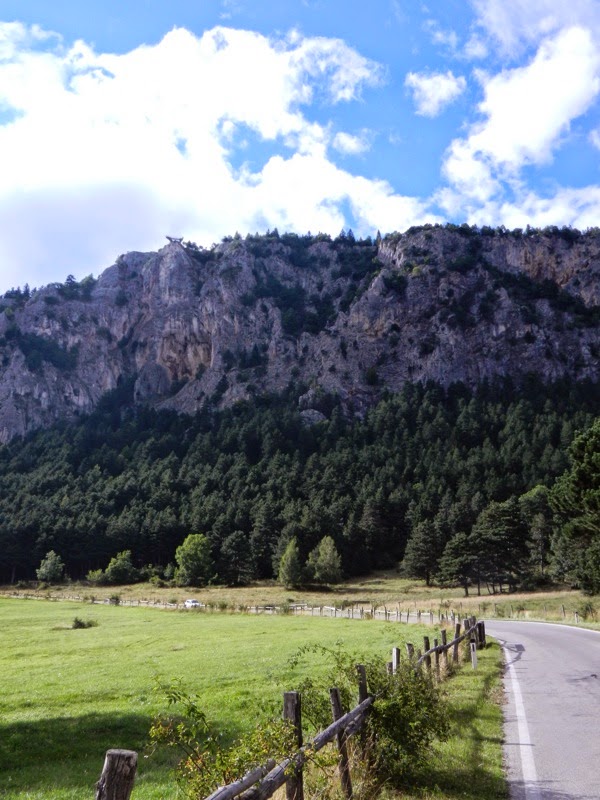 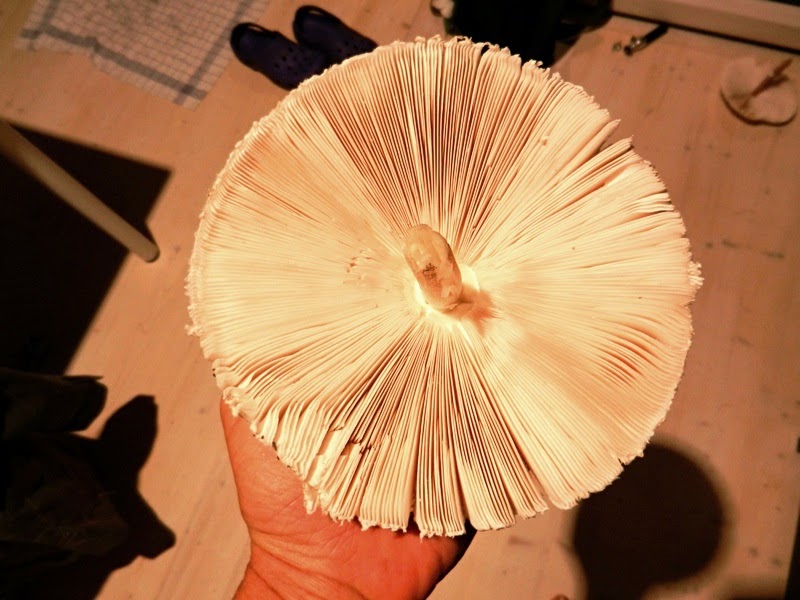 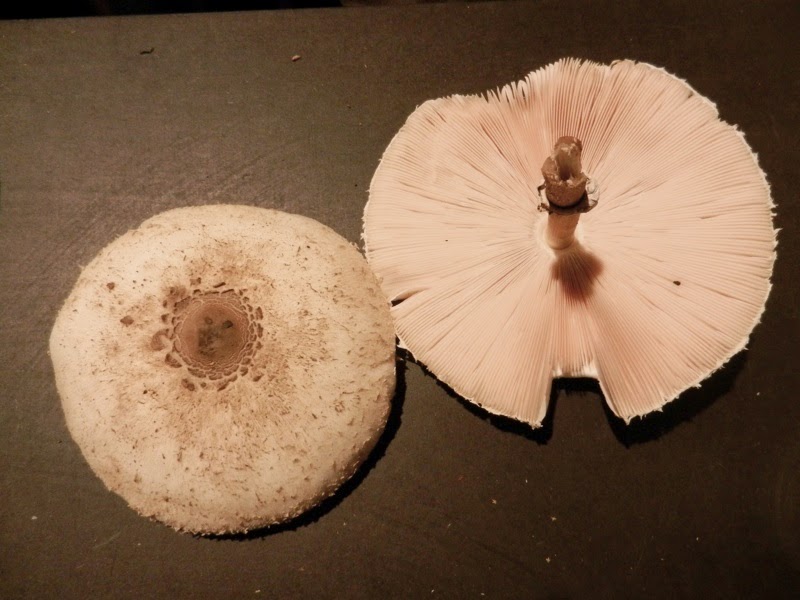 I started reading Johan Huizinga's "Homo Ludens". The great Dutch historian who was one of the founders of modern cultural history was one of my heroes when I studied history. It makes sense to reread him here and now, moving around with the ghosts on the field, wearing my tail, the tail that was custom made by our Nomadic Village tailmaker, tail-or Michi, Frau Drama, dragon mother. Being able to play is one of the fundaments of the Nomadic Village, we take our play serious and because of that it turns into something valuable, we learn from it, it makes us free, it helps us to step out of our ordinary lives and look at the world in a different way, make changes. And indeed Huizinga writes: "Here, then, we have the first main characteristic of play : that it is free, is in fact freedom. A second characteristic is closely con­nected with this, namely, that play is not "ordinary" or "real" life. It is rather a stepping out of "real" life into a temporary sphere of activity with a disposition all of its own."

In his introduction he writes "Play cannot be denied. You can deny, if you like, nearly all abstractions: justice, beauty, truth, goodness, mind, God. You can deny seriousness, but not play."

For me it is essential to play. To take my playing seriously. To feel at ease climbing down a mountain in a three piece walking suit, wondering if I should have worn my tail as well. Carrying around a small box with a secret inside, a box I found at a dumpster a year ago while staying at the Nomadic Village in France, a box I haven't opened yet but gives me an insight into peoples' minds whenever I ask them what they think might be in the box. Dressing up in cloths that aren't my own, African dresses, army trousers, a shirt that could be worn by a Californian private detective, cloth items handed in by the Nomads after I asked them to bring me a cloth item so I could be a collection of their tastes and stories.

Maybe the highlight of my stay in the Nomadic Village this year was when I constructed a fake
camera to use as a prop when we were doing a re-enactment of the final performance we all worked on, the performance during which my camera was coincidentally thrown down the cliff (a story I will write down some other time). In order to find the camera, I made one with the same size and weight. I used a cardbord tea box, filled it with stones and wood until it had the exact same weight as my camera, wrapped it in red tape so it would be extra visible and attached two straps, one for my camera and one for the camerabag, white straps out of old curtains. I threw it down the cliff at exactly the same spot in exactly the same way it was done during the performance. The search team at the foot of the hill did find the red dummy camera but my expensive Nikon never showed up.

I am sad about the Nikon but secretly I like my new red camera more. It stores images in a unique way. When you hold the red box and look carefully at something, it will stay in your head forever. You have to make sure you look carefully though. Like you have to remember to put a film or a sd card in your camera. Otherwise the image (and for image you can also read smell, touch, sound) will be gone forever. 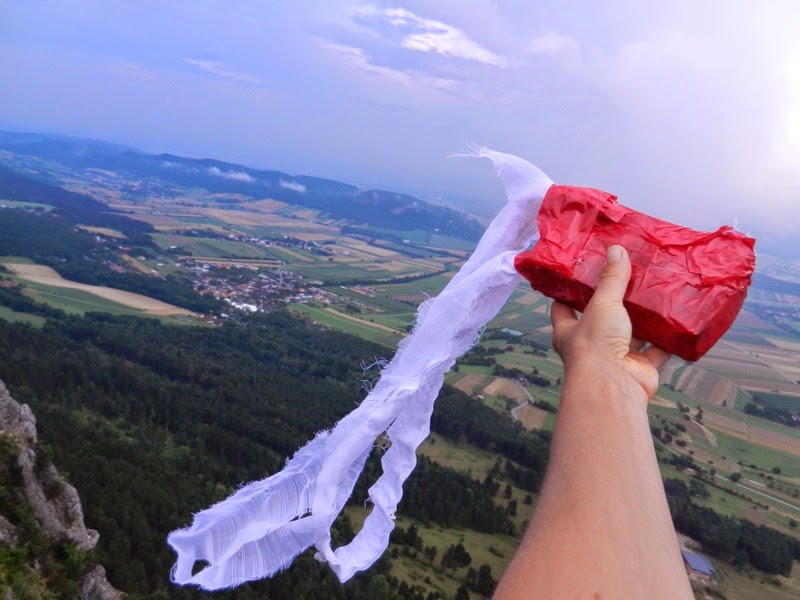