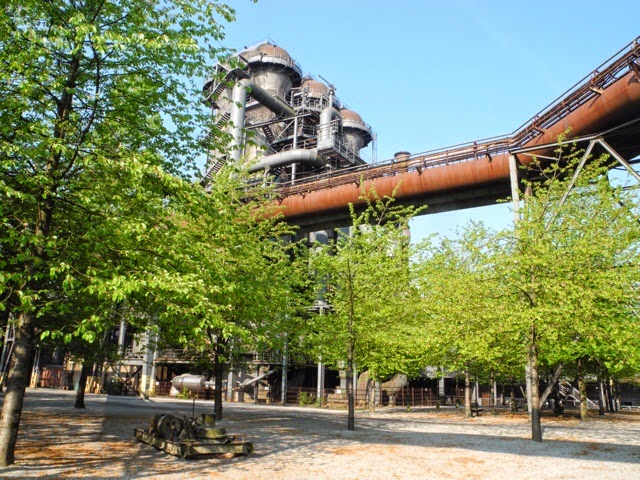 "I don't want to intrude", he said, "but can I help you?"
I had just entered the forest because I got tired of walking along a straight busy road without bike lanes. He was an elderly man in a Simpsons t-shirt, about to go running.
"No", I said, "I've got good maps. I just try to figure out if I want to make a big beautiful detour or keep walking along the terrible road. Still a long way to go today."
He asked where I was heading, again saying he didn't want to be too nosy, but I told him he could ask me anything. He used two words to describe what I was doing. Tapfer und leichtsinnig, brave and reckless. I told him I wasn't reckless, I told him I am carefull but trying to rely on my gut-feeling, on people. He said we live in terrible times. I said we don't, they are not more terrible than other times but the difference is that there is more fear and fear creates an unsafe feeling, an unsafe world. We have to fear less, trust more. My walk is about that. About trying to be fearless and look each other in the eye and make the best out of it. He said: "They found dead bodies along the road you were walking!" I told him sometimes people get shot not far from where I live in Amsterdam under my safe roof. Sometimes people in tiny peacefull villages get burgled. Bad things happen everywhere. Just like good things. He smiled. He shook my hand. He said: "Sometimes I am like you, I like to talk to people but it can be so difficult. "Life is complicated" I said. "But it is what you make it." He wished met good luck. I returned to the big road. I walked past carbage bags, old shoes, cars drove by fast. I headed for the worst part of Duisburg. The industrial area. Huge rusty constructions, former furnaces, pipelines in the air. And in the middle of all of it a hostel.

I ate diner. I wandered around the "Landschaftpark". They had turned the industrial complex where they used to melt iron into a place for people to visit, learn about their cultural heritage, relx and enjoy, even learn diving or climbing. A quiet place with impressive metal towers and lots of green inbetween. I sat at a bench in front of three enormous furnaces. Cowperplatz. Cowper Plaza. They had planted cherry trees everywhere. They filtered the light. The blossoms had fallen on the ground but were brown already. I imagined how amazing it would be to sit here when the trees are in bloom. Rusty iron and soft white petals. Birds everywhere.

I thought about the man I had met earlier today. It would have been nice to sit on this bench with him and talk a bit more.

Back in the hostel I took a shower. Two ticks were trying to hide. Wild nature is everywhere.