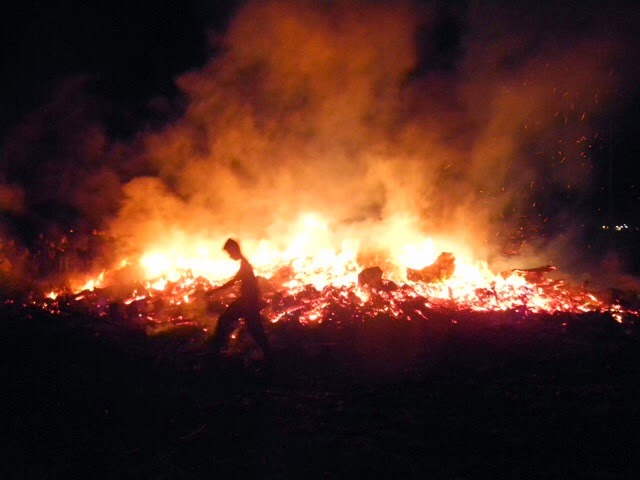 I stayed. I became visible again. I joined the Easter party at the campsite, ate "Eier-Döner", drank Hasen-Bräu beer and stared into the flames of the Easter fire. I talked to the woman who runs the campsite and she asked me if I knew about the German "Wandergesellen". I do. It is an old custom, young men who have finished their apprenticeship as a craftsman wander around for a couple of years, gaining experience, learning while travelling, finding skilled masters to teach them. They are not allowed to return to their homes or live and work nearby during this period. These days carpenters in Germany have retained the tradition, although there aren't too many out on the road. They are beautifully dressed in the traditional carpenter costume and wear big hats. I have seen a few walk around when I lived in Weimar.

When it got dark I walked to the big Easter fire down the road. People from the neighbouring villages had gathered there, they were sitting on hay bales. I got into a conversation with a man from Kazachstan, Sergej. His parents moved away from his country when he was 10, they moved around a bit, he went to school in Germany and started his own business in Kevelaer. He was a carpenter. I asked him about the Wandergesellen and he said that these days these people are exploited, underpayed, he didn't like the system. He wasn't a big fan of Germany anyway. He was aiming for the USA. Or maybe Canada, Alaska. I asked him if the cold wouldn't bother him and he laughed and I laughed too, of course it wouldn't. Kazachstan.

I didn't have to explain why I was doing what I was doing, or why it was art. The questions most people ask. He understood. He had seen the world, he was just temporarily staying here, making things out of wood, waiting for his second child to be born.

There were so many things I forgot to ask him. But it got late and the fire got smaller and most of the crowd had dispersed and I walked home in the dark, the fire at the campsite was still burning, somebody played guitar, I sat down and silently listened.
Posted by monique besten at 07:09