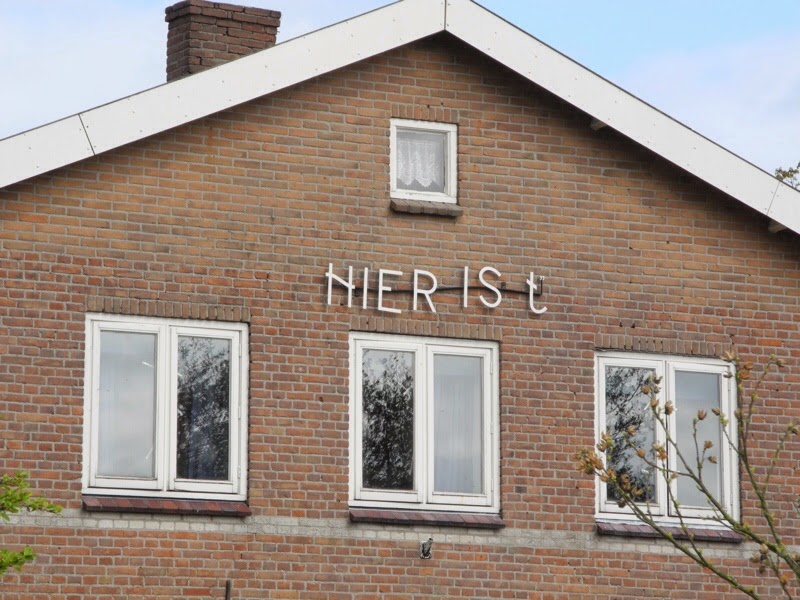 Wageningen. A purple plastic bag in the middle of the bike path. I look inside. There is a brown leather handbag. Inside a wallet, a phone, a notebook, a skirt. A letter from the hospital confirming an appointment today at 9.40. It is 9.00. She must have been on her way, bag on the back of her bike, in plastic because it was raining. Her address is on the letter. I check my map. It is on my route.
I call the hospital so when she arrives they can tell her her bag is found. But I know she would already be slightly panicking by then because she must have found out latest when she parked her bike. I know how these things work. I'm quite experienced when it comes to loosing things. Aren't we all?
I walk on, find the place where she lives, her husband arrives at the same time I do. He invites me in for coffee and asks me how he can reward me. Coffee and human company are the best rewards on a cold morning.

We exchange stories. He likes to go out on his own on his bike. He tells me about his dream to bike to Santiago de Compostella. He has done a try out already, doing half of the trip, all the way to the Spanish border and back. On that trip he endured a severe hail storm. Stones bigger than his hand falling out of the sky. He didn't get harmed but his tent was covered in a pile of hail stones but worst of all: all his route books got damaged, soaked and stuck together like one clump of book. At home he fixed them because he needed them for the real trip. To make sure they would survive the next journey he dried all the pages and laminated them. The only problem is that now they weigh twice as much.

There are more stories about people on the road, we talk about whether it is nicer to travel alone or with a companion and before we know it a lot of time had passed and his wife is back. I want to ask her if she is ok but I don't know her, I don't know why she has been in hospital so I don't. She is still wearing her rain trousers since her skirt, the one she had been planning to wear for the doctor's visit, was in her handbag. She asks about my walk and when I explain it is how I make a living, she says it is good these things are possible these days, that it would have been impossible in earlier times. But in fact it is the other way around. Artists used to be payed by kings, counts, emporers, be in their service or have them as their maecenas. Getting commisioned to make work and get money or a place to live in return. Goya, Leonardo da Vinci, Mozart, there are many examples.

They ask me if they can sponsor my trip and I tell them they can if they like my project but not as a reward for finding the bag. I had my coffee and new stories to share. They wave me out.

I leave Wageningen, thinking about all the stories I collected, about my story being spread. About all the stories becoming one story. I think about the times before there was internet, tv, radio, mail. How storytellers moved around to spread the big news. How people listened to them, celebrated when they arrived, payed them in different ways. I felt connected. I realised these days people can see what is happening in the world any moment of the day, the big stories, the terrible news, earthquakes, wars, revolution, elections, crisis, global warming, etc. What I try to do is bring them the small stories, ask for their small stories and tie them all into a big story. A story about moving through the world in the best way possible. A story of slow change. A story about getting rid of fear. A story about combining the old and the new, the big and the small.

And then I met René and he confirms my thoughts. I pass his house while he is walking up to his mailbox - when we are drinking coffee inside the house later, he tells me that in fact walking to the mailbox was an excuse to see what I was dragging behind me - and at the same time a car stops to ask for directions. René explains and I ask him if by any chance he knows how to get to Austria. Without hesitating a moment he explains me how to travel. He laugs. He is a busdriver, driving tourists around Europe to all kinds of destinations. He knows the road to Austria.

There is a text on the wall of his house. Hier is 't. It is here. He invites me in.We drink coffee and he tells me how these days the people in his bus don't care about the historical facts or background information he used to tell his pasengers. People sit in the bus with their tablets and check what happened outside while they pass by. So he tells them more personal stories, jokes. They aren't there to see what is outside, they know about it, they've seen it on tv, on their computer. They want to be informed, entertained in a different way.

It is early in the afternoon. Too early to stay for spareribs and pitch my tent in his garden. He and his partner just moved there. She trims dogs. They look happy.
5 minutes after I left René drives by in his car. He forgot to explain to me what is the nicest road to walk to Nijmegen. Nijmegen, a proper city with a nice hostel. It will freeze tonight. I booked a bed. I will have walked almost 120 km in 5 days. Time for a walking break.

But not yet. Still 12 km to go. Through fields. Villages. Passing people. Cars. Churches.
In Slijk Eeuwijk I find a set of car keys. It is a day to find things. I look around me. The nearest house has a big hummer standing in front of its door. The keys say Volvo. But the hummer man owns a
Volvo as well. He already saw me, thinking I admired the big hummer. I don't. I like old cars. I've got a secret love for the Niva Tatra. I still dream of turning a Citroen HY into a Zen Van with a friend from America (the basic idea is his, the car suggestion is mine). I remember the old blue Saab I used to pass as a teenager biking to school. The hummer isn't my kind of car. The owner, who is used to having his Volvo car keys lying under a tree outside because his dog always takes them when he comes home and sometimes he forgets to get them back, the owner of the Volvo and the hummer tells me the big guy drives 1 on 3. His young daughter and a friend join us. The friend just came back from Austria. Their mouths fall open when I tell them I will go there walking. When I take a photo of the girls they put up their thumbs for the picture. And for me. I leave Slijk-Eeuwijk, enter the dike, see the big river Waal. From the far distance I hear two girls shouting something. I can't see them but I wave. "Good luck!" They are calling.

I can see Nijmegen in the far distance. I just follow the river. It is the end of the afternoon already. I stop to collect seeds I see lying on the ground. I look up and see big acacia trees. A man on a bike stops to ask what I doing. "I collect seeds" I tell him. "I research the air quality" he says. "Co2 emission". I tell him we are in the same branch in a way, researching how to live in the world in the best possible way. I tell him I am walking to Austria. "I had a job interview in Austria once", he says, "but they didn't take me". I tell him I am an artist. He says he makes art too, he has just bought something important. It is on the back of his bike. He shows me prints of old locomotives. I ask him what he will use them for. "You will see", he says."It will be a big thing. I've got drawings at home but I can't publish them yet. They would sue me. It will have a big impact. It will be applied everywhere." He looks around him as if checking if anybody is spying on him. I try to find out more. "I will put these in a landscape", he says. "But I am not an artist. I am a constructor, a creator. I don't trust people who call themselves artists." I smiled. "Artist is just a word. It doesn't matter how you call yourself. What you do is what matters", I answer. He doesn't listen. I guess I am one of those people he doesn't trust. I don't mind calling myself an artist until I found a better word for what I am doing. He strokes his steam locomotives. "I am an absurdist!" he says. Time to say goodbye. "Check the internet" he says when I get ready to move, "you will see!".

What a strange day.

Walking on. Last kilometers. A big bridge crossing the Waal. Big stairs to get up there. I like obstacles. I am in training still. Heading for the Alps. I tried some small hills, crowded supermarkets, narrow sandy roads. No stairs yet. There is a thing for bikes. I make my cart pretend it is a bike and it goes well. Going down at the other end is easier.

Nijmegen. Hostel Barbarossa. Last hindernis. Stairs again. The steepest ones I've seen in a long time. Joep comes out to help me carry. He has a red beard. But more about that tomorrow. After I had a shower and slept in a warm bed.


(Today's story is for Joep & his Hostel Barbarossa)
Posted by monique besten at 02:45