I didn’t plan my route, I didn’t even know where exactly I was going until today. The only mountains I climbed lately were the piles of things that had to be done before I could leave. We all know these mountains well. Like real mountains, they sort of stay the same size always. They don’t really get smaller, they erode a bit, they appear to get higher at times, they change through the seasons but they remain located at the centre of the world, of your life, always.

I bought new shoes before I left.

In the shop they asked me what the terrain would be like, where I was going to walk. I told them I wasn’t sure. But I suspected there would be a lot of tarmac and especially in the beginning quite flat areas, getting hillier in Germany and finally, in the last part, in Austria, the real mountains.

They advised me to get a light shoe with a flexible sole. I tried them on. I walked around. I thought of tarmac and the Dutch countryside. I thought of the Ruhr district, of well paved roads. But I couldn’t get the mountains out of my head.

Once, when I lived a temporary solitary life at the most Western part of Europe, on an Irish island, I stayed in a pink house located opposite a mountain. In the late afternoon I would sit at my desk and stare at the mountain. Sitting still while the mountain was moving. Changing. Turning from grey to brown to orange to black to golden. Being covered in clouds or impressively naked. Being threatening or beautiful or comforting. Sometimes everything at the same time.
During the day I was biking around the island. On my bike, I felt like a mountain. Everything changing around me, I myself changing colours and texture, my surface becoming wet or shiny or dusty. The island staring at me. The mountains nodding when I wasn’t looking.

I tried to think like a mountain. I bought a pair of shoes. And today, when I was wearing them, I received an e-mail from Captain Klaus, the Nomadic Village mayor, announcing this year's location of the village. My destination is at the end of a steep climb. It is on top of a place called “Hohe Wand”, “High Wall”.

For now I am still below sea level. But the mountain in my head doesn’t mind. And my feet don't either. They are already imagining walking mountains. 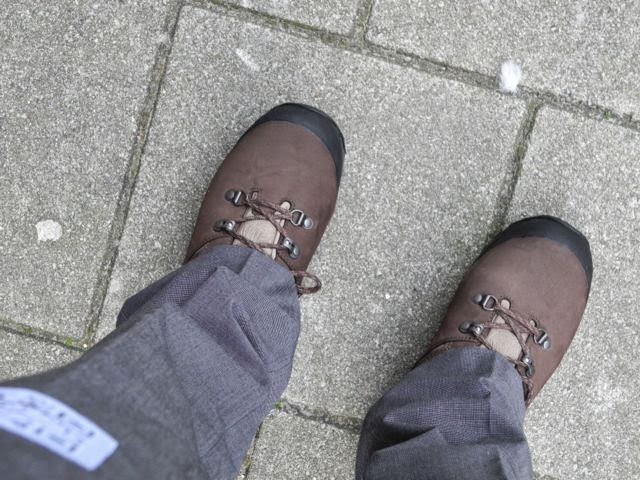 (Today's story is for Danielle Besten. It is her birthday.)
Posted by monique besten at 11:09