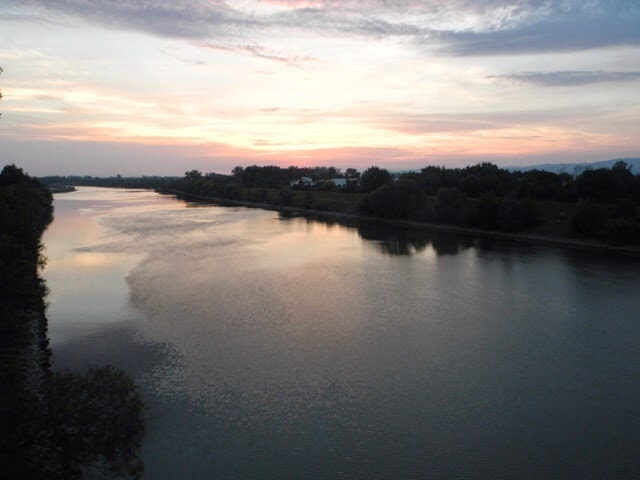 Early in the morning one of the legs of my recently found pink sunglasses fell off. I don't know if it was a sign of something, but looking back at the day it could very well have been. The pink, rosy feeling I had had since I put on the sunglasses and passed Walhalla, slowly disappeared. I promised myself a proper break somewhere with coffee, icecream maybe, but all day I didn't pass a cafe or restaurant that was open. It was hotter than hot and my leg was painful. I wanted to reach the next campsite, 32 kilometers. Too far for my leg but a big thunderstorm would hit this area by the end of the day and I thought it wise not to sleep in the woods. At some point an interesting looking couple passed me on their bikes. They turned their heads, hesitated but biked on. They looked well equiped but in an alternative way. Not the nice shiny bags, helmets, biking gear but casual, improvised. These moments of recognition are nice. Real travellers passing each other.

I carried a few liters of water with me but not having found a cafe on the road to refill, I found myself without a drop in the middle of the afternoon. The bikers' oasis I had aimed for was deserted and although it said "open" there was nobody to take my order. The Gasthof was closed too. I rang a few doorbells to ask for water but nobody was home. The bank was open though and willing to give me water. Water like money.
I was slow, the afternoon was ending, the road was empty. Out of nowhere the couple from earlier on passed me. This time they stopped. They walked with me. We talked about travelling, about the things we carried with us, our handy equipment, we exchanged travellers' secrets. His favorite item was the foldable bucket he had with him. Lightweight, very small after folding it, but it could hold 10 liters of water. Handy for cooling feet and beers but most of all to get water from places that are hard to reach by tying a rope to it, for example on a bridge over the water. They used it to wash themselves in the mornings and evenings. Like me they were sleeping outside as much as possible.
They gave me gifts. A homeopathic medicin against tick bites. Small block for quick fires. A bottle of beer for the evening. We drank some rum while walking. I told them about the Beinheil, the Leg Cure, more commonly known as comfrey. He told me about a plant you can use for blisters, I don't known its English or German name, in Dutch it is "weegbree" but specifically the species with wide leaves.

They drove off but he returned to give me the rest of the rum. To ease the pain in my leg. To return to the pink, rosy feeling.
I drank it while walking. It worked. I arrived at the campsite just after nine. It was getting dark. My leg was happy.
A small army of white expensive big clean mobile homes were standing in line, neatly placed in straight rows. Grey haired heads turning around to watch me. There was nobody at the reception so I walked into the restaurant, my wagon still attached to me like it is usually when I enter a place. A woman came up to me and scolded me for entering with my wagon. "You can't do that!" she said. "You wouldn't take a bike inside here either, would you?" she said angrily. "First put it outside, then you can register." "Bye," I said, turned around and walked off. Relieved.

I walked on. The storm never reached me. It was still warm. I found a good spot in a dense forest. In case it would rain at night. But it didn't.


(todays story is for Jenna Tonking)
Posted by monique besten at 08:27