Day 65. In search of silence 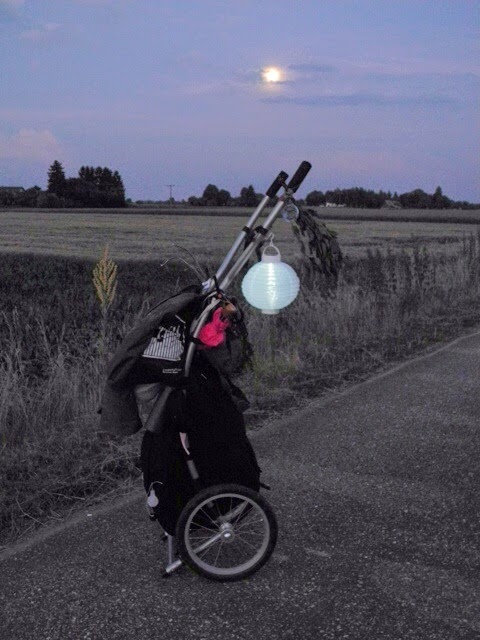 "One day, I watched the sun setting forty-four times," you told me. And a little later, you added: "You know ... When one is so terribly sad, one loves sunsets ..."
" The day you watched those forty-four sunsets, were you sad?" I asked.
But the little prince made no reply.


Friendly meetings in the morning. The gift bearing couple from the evening before passed me again. They seemed to be slower on their bikes than I am on my feet. They go with the flow. They slept in, in a field. We said goodbye again, bis zum nächsten Mal.
Over coffee, when I was planning to write some reports, I talked to a man in the railway cafe. He was walking to the Czech Republic. He told me about a long walk he made in Lapland, where the nights were light, where he slept during the day and walked during the night. Padjelanta. I wrote it down.

It was the first day in a week I didn't notice my hurt leg with every step, it wasn't as hot as the day before, my head was empty and filled itself with new ideas from time to time. I felt light and I decided to spent the rest of the afternoon walking without talking to people.

The first man didn't understand. He had passed me before, I recognised his face. He stepped off his bike, waited until i had finished taking a photo of a field. He started talking. I tried explaining I wasn't talking, without using words, but he thought I was unable to speak. When I told him I wasn't talking today, he started asking questions. I repeated my words, said it was a day to be silent. He asked if I couldn't speak just a little bit. I told him the road had been long and full, today no words. He thought he understood. He said "Yes, I understand, you are "kaput", broken." But I wasn't. Even with a soar leg I was more whole than ever. That is why I wanted to be silent. To realise that. But I didn't want to explain. I waved and walked on.

Half an hour later a man passed on his motorbike. He stopped, drove back, stopped next to me. "Today I don't talk," I said. "I've been on the road so long and talked so much, today I need to be silent." He said he understood. He said he just wanted to watch. Again I was in the middle of
photographing something and for the next few minutes he just stood there and stared at my cart and
me. I felt uncomfortable. I waved and walked on.

It is difficult to be silent amongst people. And I also found it difficult not to respond to people who want to know about what I am doing. They are my audience and I feel a responsibility towards them. But I need a break from time to time and I could look for a place without people and sit still, hide, but usually the break is in the walking. The walking clears my head, gives me piece of mind. On my resting days I talk, I embroider, I write. In the evenings I take care of my body, my tent, my laundry. When I walk I rest.

After a third unsuccessfull non-meeting I needed a break from trying to be silent and I found a lonely silent spot along the Danube bank, I built another fridge for a bottle of beer -another gift from the gift-bearing couple-, washed my cloths, swam, prepared some food. That is when two mothers with their two kids arrived. There were 1000 places where they could have installed themselves, I had made sure to skip the spots close to the biketrail, the long danube bank was empty as far as I could see. They seated themselves two meters from my right and started talking loudly.

I packed and moved. Building a one beer bottle fridge in a river is easy. Finding new silence is easy
too. The Danube made some noise but that was ok. I read Saint Exupéry's "The little Prince".

I stayed until eight, left before the sun set. I never see the sun set during my walk. I walk east every day.
I sometimes see the moon rise though. I did today. A full moon, glorious in a clear sky. Far away I
saw some lightning. I walked in the moonlight. Silent. I wondered if I should walk all night. 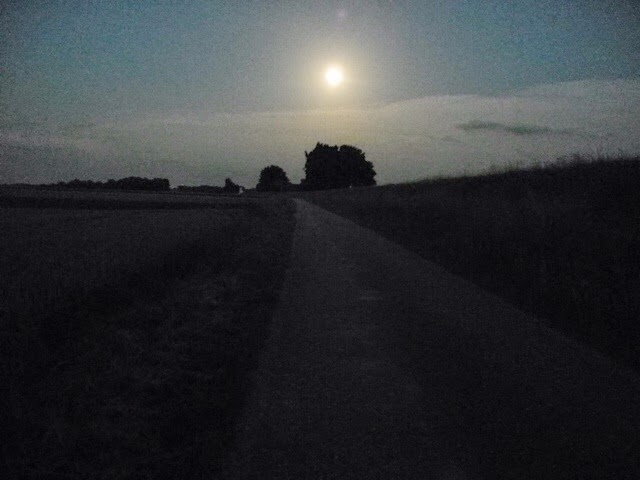