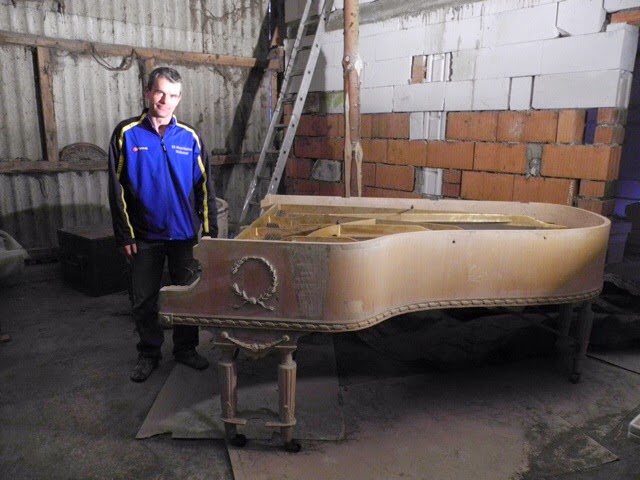 I never reached Lauterbach. I passed the Kabachhof in Heblos, a farm just outside a small village. They rented out rooms and a haybed in summer. There was hardly any hay yet, but the farmer was happy to find me a mattress and I had the whole attic of the big barn to myself. It was a magic place. It smelled of hay and where-ever I looked, I saw big balls of blue thread. In small piles, big piles, in boxes, in corners, inbetween the collection of old bikes. The farmer proudly showed me the bikes. He was planning to make something out of them but he didn't know what yet. So much to do, so little time. The daily labour, taking care of holiday guests, odd things like building a room in a corner of the attic. He pointed at the room. I asked him what it was for. Expecting an answer like "tools" or "storage" but he smiled shyly and answered "for a grand piano".

We went inside, he turned on the light, the grand piano was under a cover. He took it off. It was beautiful. Naked though, without the keys and no paint or lacque. Some pieces of wood had been replaced. The woodcarving was delicate. The piano keys, with ivory top-layer were under another cover. The farm would celebrate its 50th birthday in summer, he was hoping to have the room ready by then. Nicely done, windows overlooking the field. The grand piano restaurated and covered in a new colour. He didn't want the new lacque to be shiny, it wouldn't fit a farm. A matte dark colour. A blue-green. He explained how the farm had been situated in the village until his father wanted to have more space. They moved the building. And now he was building a small room for his big dream in the middle of it.
He was called Kurt, he learned to play the piano young but had stopped when he was 13. When he was 18 he found a book with music by Konstantin Wecker. It got him playing again, he described how he would play firmly, almost aggresively because it fitted the texts, it was his way of dealing with his emotions as a young angry man.
He looked for the music standard. It was his favorite piece. Beautifully carved leaves. I asked him if I could take a photo of him with the standard and he wanted to pose in front of some big hay bales.

Afterwards he built me a small room without walls in the middle of the attic. A mattress, a table and a chair, a cable so I could use electricity. He fetched me a bottle of home made apple juice. It was only 8 'o clock but I was freezing cold already. I sat at the table, ate bread with cheese and sausage, drank apple juice. I got into my sleeping bag before it was even dark. Surrounded by blue balls of thread, with the grand piano as my neighbour. I hardly slept because of the cold but I didn't mind. I was in a dream anyhow. 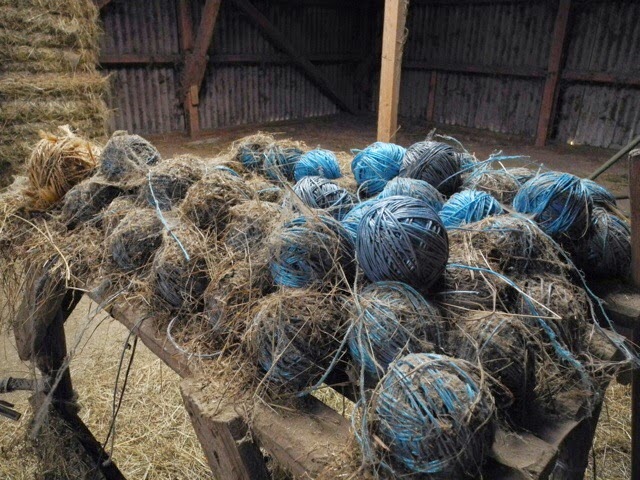