Day 37. Sometimes the worst is the best that can happen to you 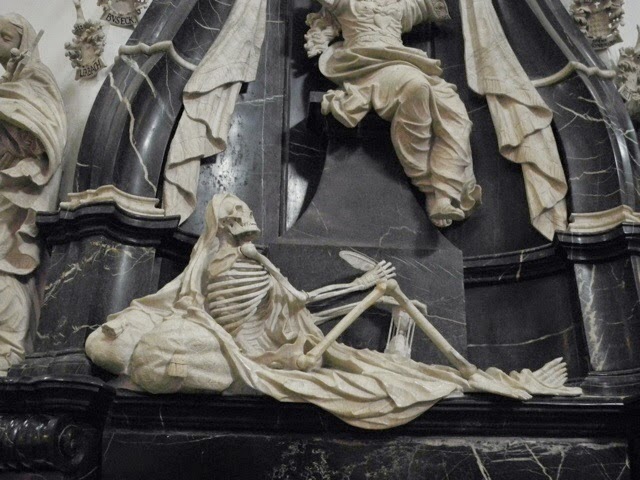 I had booked the small apartment the day before. 3 or for 4 nights. I needed to warm up, catch up on my writing, do my laundry, answer e-mails. The apartment was lovely and close to the center. The man who owned it was strange though.

He showed me the room, then accompanied me to the supermarket. I was slow. He left. But when I came back he was standing in the door, waiting for me. I took my big bag with groceries upstairs. I heard an alarm somehwere. "Beep-beep-beep-beep-beep-beep-beep". Two minutes late I heard it again. And two minutes later again.
I searched the apartment, couldn't locate the sound, went downstairs, the man came up, removed the smoke-alarm to change its batteries, thinking he had solved it. He didn't return but the beep was still there. I fetched him again. He searched the apartment. And suddenly, it was eleven already, it stopped.

When I woke up next morning at 9 it was there again. I waited. At 10.30 I called the house owner. He suggested I would leave and search for another place. I had unpacked all my things, done my laundry, bought supplies. I told him it would be somewhat complicated. He said he would be back at 1 'o clock.

At 11 the beep stopped. I decided to make a deal with the man. Pay a little less and take whatever inconvenience for granted. But when he returned he exploded before I could even say anything. "Didn't you pack your things?" he said. "I am leaving in half an hour, I expect you to be gone by then." I looked around me and knew there was no way I could pack everything in half an hour. I tried to explain to him I had been moving every day in the cold until now and really needed to stay foot somewhere, even if there was a beep. When I told him my laundry wasn't dry yet he got even angrier. "Laundry? You can't do your laundry in this place. What are you thinking? Where is it?" I told him it was not much, a few small cloth items in the bathroom and before I knew it he had marched over to the bathroom and was staring at my wet underwear.

I realised it was wiser to leave. He asked for my passport to write down my information. He told me he didn't trust me. I gave him my passport and he left. He didn't return. I send a quick e-mail to a friend telling him where I was. I wasn't afraid but it is better to be cautious in a strange situation.

I packed my things. I left some of the food behind. It was too heavy to carry. I had no idea what to do.

The information office wasn't far from the house. The lady there told me there was a big fair in the city and it would be hard to find accomodation. The only thing she could offer me was an expensive hotel room for one night only. And a booklet with all the accomodation in town so I could call around. Try something far away from the center, in one of the neighbouring villages was what she recommended. I looked at my cart, all my bags, the groceries.

There was a cafe next to the information office. I looked inside. It looked nice. I dragged all my things inside, ordered a cappucino. The woman who brought me the cappucino was curious about my story. Before I knew it I had made a new friend. And had found a place to stay as long as I wanted. Claudia showed me a photo of the house where she lived with some other students, 20 kilometer out of the city. A school for ergotherapy and physiotherapy. I could use her room. She showed me another photo.

And so I put my things in her car, drank coffee with a friend of hers, wandered around town, returned, drank white wine, was driven into the countryside.

Magic.
Posted by monique besten at 19:19