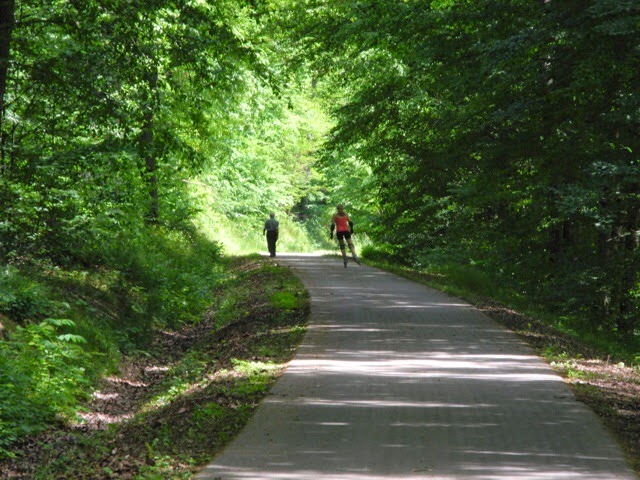 The tractor engine woke me up. I got out of my tent and saw him leave. I had wanted to talk to him but he arrived late, just a little after I arrived and I needed a silent evening. I thought there would be an opportunity to talk in the morning but there wasn't. I wondered where he was going, where he had come from. Who he was.

Usually I am the one drawing the most attention on a campsite but this time I didn't. He drove a baby tractor, pulling a small wooden house on wheels. He was just in time to catch the last bit of evening sun. From the other end of the field I kept an eye on him. He was reading. He hung out his cloths. When it got cold he moved inside, he lighted a small lamp, when I walked to the toilet I peeped inside. It looked cozy.

I packed my things and left. Just outside the campside I saw another strange vehicle. A sporty bike without a saddle. The peddals going up and down instead of round and round. A step machine on wheels. The people in this street must be wondering what is going on. First the baby tractor, then the saddleless bike and now me. All within one hour.

I walked in the direction of Bad Neustadt. An old man walking in the direction I had just come from stopped me. He asked the questions. The where and how and why. He told me he once walked from his house, not far from here, to Santiago de Compostella. When he returned he didn't know what to do with his life. Returning is hard.

I walked on and was stopped again. A fast woman in pink on skates stopped to talk to me. She lived in Bad Neustadt. She had been there all her life, fifty something years I guessed, she had been thinking about moving somewhere else often but never did. Sometimes you just stay. She told me she had seen me and my cart last Saturday, not far from Fulda. She was very sure about it. But Saturday I hadn't been walking. I had been in a kinesio taping course at the Schwarzerden Academy. Strange.
We heard a cuckoo not far away and I told her I hear a cuckoo almost every day, it feels as if it is one and the same bird following me. "Hearing a cuckoo is a sign of wealth," she said,"Might be real richess or mental enrichment. You must be lucky." She got back into full speed, we would meet again later she said. I was puzzled for a moment but she explained that she was skating up and down, like she did almost every day. And indeed she did, maybe half an hour later, passing me by fast, waving and wishing me good luck. I followed her with my eyes and saw her passing another person further down the road, walking in the same direction she was heading. It looked like the man I talked to earlier but I couldn't imagine it, since he had been walking in the other way. Still the closer I got, the more details seemed to be the same. The black trousers, light shirt, white cap, small posture, glasses. Had he been walking a small circle? Had I been talking to the fast pink lady longer than I had thought? Time can work in strange ways.
When I passed him, I raised my hand and wanted to say something but he had turned into another old man after all.

Bad Neustadt. Another cute beautiful city. I continued through smaller villages until it got later. Until it was time to find a place to spend the night.

I like searching for the perfect place to secretly camp. The perfect place is different every day, depending on the weather, amount of people in the area, the plan for the next day. I usually don't drift too far away from my route. Around seven I start searching for a good place along the road I am walking. Usually something catches my eye and I walk there. Today it was a big pile of wood next to the woods but when I got there and entered the trees I was invaded by musquitos. My second try failed because the farmer, who owned the field I was about to pitch my tent, drove by when it was starting to get dark and chased me away. Nearby I found the perfect spot. A beautiful house in a small clearing in the same woods, covered in spider webs. Nobody had been there for a long time. I camped behind the house, sat on the porch for a while, looking at the stars.