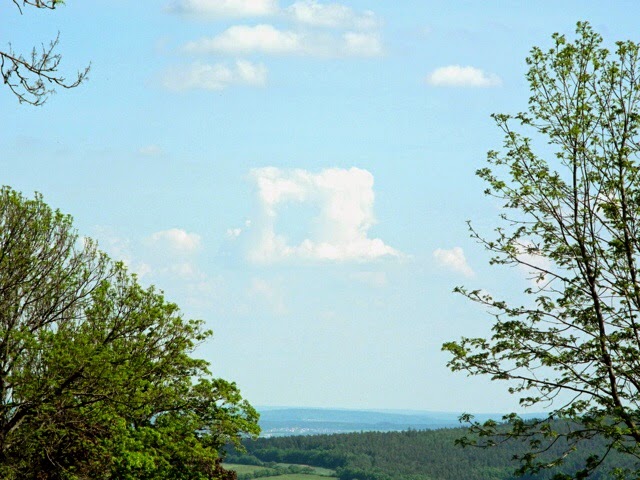 I arrived in Königsberg yesterday around five. I dreamt. I must have dreamt. I dreamt I sat outside a cafe in the late afternoon sun, drinking cappucino, eating freshly baked cheesecake. A big bouquet of wild flowers on the table. In the nearest building two musicians were playing ud and tabla. I pinched my arm. Nothing happened.

I put out a call for a sleeping place in Bamberg for Monday and Tuesday on the Couchsurfing website. I had never tried it before. I was curious if anything would happen.

I found my room. I saw the big soft bed. I went out for diner. I drank white local wine. I made a walk through town. A beautiful town. I pinched my arm. Nothing happened.

Back in the room I found a message on my computer from an archeology student in Bamberg, inviting me over in the next week to sleep on her couch. She sounded like a nice person.

I slept well, I ate breakfast, on my way to the cafe I saw a space that looked like a small gallery. I looked inside and saw two men and a woman sitting around a computer. They invited me in. Me in my suit with the embroidered QR codes. There was a big cube in the middle of the space. It had a QR code mosaic on all sides. Clarissa walked in. The cube was part of her most recent art project. She showed me a photo of herself wearing a men's suit. She told me she named herself after the blackbird. Van Amseln. We started talking and never stopped. I found out the two men were the musicians I had heard the day before. Peter, the Ud player, was Clarissa's partner. In life and in art. I pinched my arm. Nothing.

Clarissa cooked, we had diner. We made a walk around town, through the fields Clarissa knew every inch of. We talked about art as a gift. About creating a community where you can live and work without money. About their upcoming project and new approach in life where they want to give their art away for free and let people sign a contract which prevents them from selling it. People who would like one of their art pieces can pass it on to somebody else, transform it, throw it away, but not sell it. They want to earn their money through crowdfunding to be able to give all they produce away for free.

Earlier in the evening Clarissa had spoken about a research project in Europe somewhere, where they had turned around the banking system of getting interest when you put money in the bank. Instead of getting more, you have to pay a very small amount for the bank to keep your money safe. The more money you had, the more interest you had to pay. And because people don't like paying, they rather invested in things that would keep their value. They had nice wooden tables made, bought art, invested in renovating their house, the economy bloomed, villages in the same region were interested in trying it out and then the government prevented it by stopping the experiment and making it  illegal.

They invited me to stay at their place the next day. And have my photo taken in their studio where they specialise in old photography techniques, making wet plate colodium prints. I didn't pinch my arm. I knew nothing would happen.

At night I got a message from my upcoming host in Bamberg. I had written her I was spending some time with two artists in Königsberg. She asked me to say hello to Clarissa. I had never mentioned Clarissa's name though. But sometimes the world is so small I can hold it in my hands.

I pinched my arm hard. It didn't hurt.